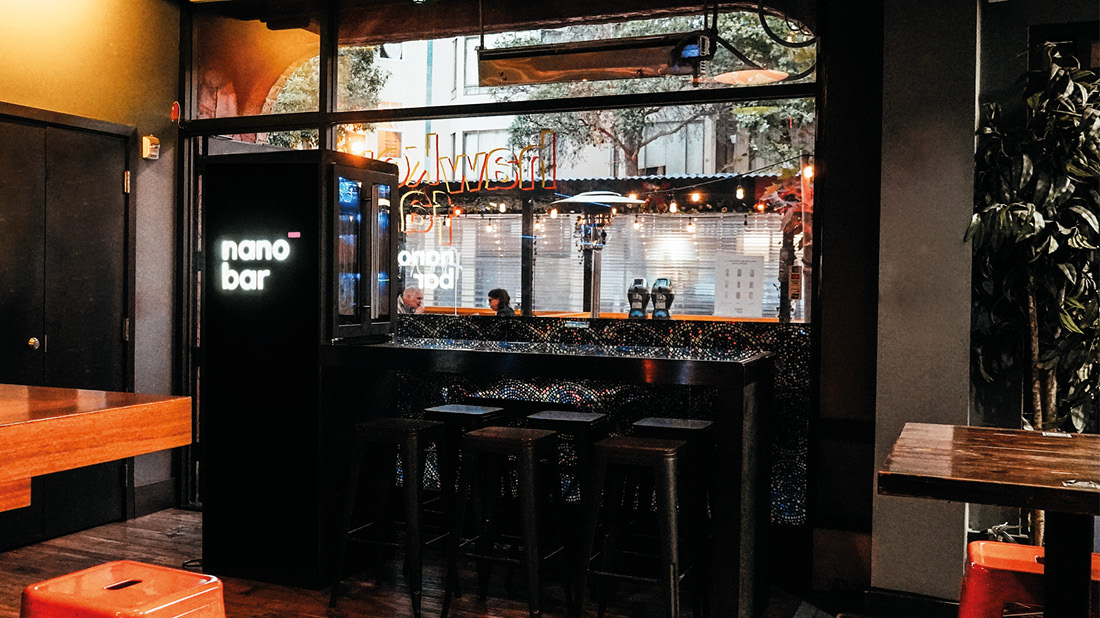 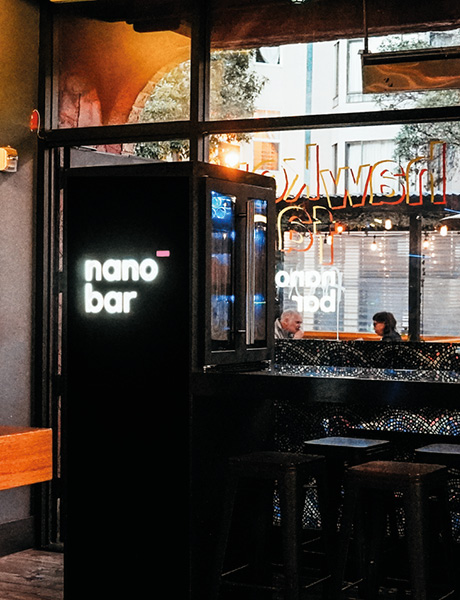 By mixing simple-to-use hardware with innovative digital technology and a revolutionary direct distribution mechanism, San Francisco-based startup nanobar has all the ingredients needed to profit from the youth-driven ‘sober curious’ movement. We learned more from founder, and Glion alumnus, Raphaël Marchand…

Are you sober-curious? It may be a phrase that’s completely unfamiliar right now; but if you are in hospitality it’s one you are likely to get to know very well in the coming years. And it’s a trend you simply cannot afford to ignore.

The idea of not drinking alcohol when socializing is hardly new: the word originally associated with alcohol abstinence – ‘teetotal’ – dates back to the 19th century. But the movement is taking on fresh impetus with a sober-curious younger generation which is more health-conscious than ever.

In the United States, which (after Germany) is the world’s second largest low-alcohol/no alcohol market by volume, the no/low segment saw growth of more than 30% in 2020 – even in the midst of a pandemic. That’s according to data gathered by market analysts IWSR, which also forecasts global consumption growth in this segment of 31% by 2024.

“What we’re seeing is a moderation trend that’s sweeping across key global markets, and that’s bringing with it increased demand for reduced alcohol, or alcohol-free drinks,” says Mark Meek, CEO of IWSR.

Such a trend matters in hospitality, where beverage sales are often crucial to the bottom line. And it explains the buzz around a San Franciscan startup called nanobar, led by two Glion alumni: Raphaël Marchand and Sebastien Besson.

Nanobar is a zero-proof smart bar, which can be installed in any type of hospitality venue from bar to spa to hotel to gym. For the host, it involves no capital outlay, with the equipment leased on a 24-month contract for a monthly fee that also includes maintenance, inventory re-ordering, yield management services and ID checking/payment processing.

It sounds like one of those brilliantly simple ideas we all wish we’d come up with. And for Raphaël Marchand it owes its origins to his post-Glion career at luxury hotel operator Fairmont Hotels and Resorts.

“I had this idea in mind for a while; that there was a different way to deliver beverages which would be both labor efficient and futuristic. I worked in hotels after graduating and ended up being the Director of Marketing for the legendary Fairmont San Francisco, and also Silicon Valley’s largest hotel, the Fairmont San Jose. It was there that I noticed the persistent upward trend for non-alcoholic beverages,” says the French-American alumnus.

At the same time, the digital technology required to power an idea like nanobar also began to advance rapidly, making the concept sounder financially. Raphaël admits that even two years ago the cost and complexity of ID scanning and biometric identification would have rendered the present concept impracticable.

With things falling into place, a mutual friend from Glion put Raphaël in touch with Sebastien Besson. And though the two hadn’t known each other on campus, Sebastien came on board without hesitation.

A brand on a Mission

To discover nanobar, you have to take a trip into San Francisco’s arty Mission District, where the first prototype is trading profitably at Hawker fare, a popular Lao Issan style tiki bar and restaurant located at 680 Valencia Street.

The nanobar itself is fully automated and works via a web app which captures proof of age ID and biometrics of customers, as well as handling payment. The chilled cabinet features a curated selection of zero proof beverages, which can include non-alcoholic beer, NA cocktails, CBD infused drinks and so-called ‘functional drinks’ (such as herbals). At Hawker fare there are usually nine different drinks available, with a nanobar menu provided alongside the main restaurant menu.

“We have tiny brands alongside the very biggest; but the interesting thing is that the big brands like Bud Zero and Heineken 00 are our lowest sellers. The reason is because these are the products you can buy in the supermarket; so people want to try something new and different when they are out at a restaurant,” explains Raphaël.

With a typical selling price of $6.99 the nanobar offer is priced attractively when compared with bar-served ‘mocktails’, while still being sufficient to generate a margin for the venue, the drinks maker and nanobar the company. Raphaël sees it as a win/win – even more so given the likelihood of many sober customers opting merely for tap water at no charge, in the absence of the nanobar option.

As well as healthy sales, the pilot nanobar is already generating intriguing levels of customer loyalty. Though day-to-day operations such as restocking are left entirely to the restaurant, Raphaël admits that he can occasionally be found lurking at the back of the restaurant, watching how customers interact with his ‘baby’.

“The sober curious community is very loyal. I recently spoke with some customers who drove two hours on a Friday to come to the nanobar, because the wife doesn’t drink alcohol and they struggled to find somewhere they could be comfortable. We’ve also launched a simple online store, which converts through a basic email retargeting. In September this year we had one in 50 nanobar users subsequently buying something online,” he says.

Capturing data in this way is, ultimately, the route to success in Raphaël’s mind. “We see ourselves as a data company, not a hardware company. By processing IDs and credit cards we gather incredibly rich information on customer tastes and trends – information that drinks companies have found really hard to come by in such detail in the past.” 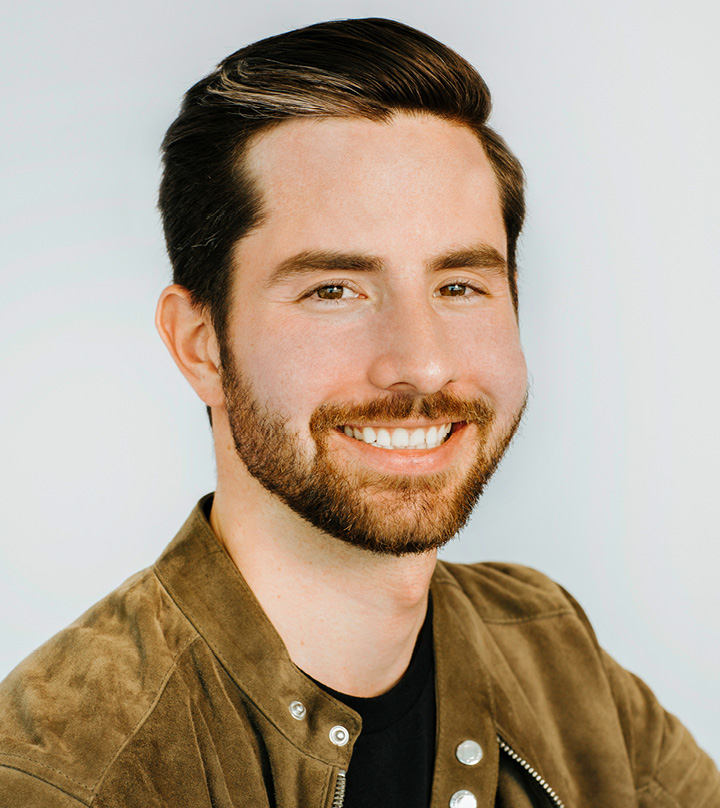 “The sober curious community is very loyal. I recently spoke with some customers who drove two hours on a Friday to come to the nanobar, because the wife doesn’t drink alcohol and they struggled to find somewhere they could be comfortable. We’ve also launched a simple online store, which converts through a basic email retargeting. In September this year we had one in 50 nanobar users subsequently buying something online.”

Breaking the mold on distribution

Another innovation in the nanobar portfolio is an inventory management tool called nVDS (nanobar Virtual Distribution Services). This places orders directly with the beverage makers on behalf of nanobars – a significant departure from a market where the US regulatory regime has always compelled the use of distributors as middlemen.

It’s an attractive proposition, which helps to explain why nanobar has already secured a partnership with Athletic Brewing, a brand that has risen from nowhere to become the largest independent non-alcoholic beer maker in the US.

“The CEO of Athletic loves the concept because they are a DTC (direct to customer) company, which means they can afford to give up a bit of margin to deal with us at wholesale prices,” says Raphaël.

Show us the money

With the idea crystallized, and a real-world prototype adding proof of concept, next comes the stage that Raphaël acknowledges will be the most challenging: securing venture capital (VC) funding to take nanobar to the next level.

“We are trying to raise around half a million dollars in pre-seed funding,” he says. “That’s not a large amount in San Francisco terms, but the travel and hospitality space hasn’t seen that many big tech winners since Airbnb, while others have come to the realization that scaling was far more expensive than previously anticipated, so potential investors need persuading. In that regard nanobar is positioning itself more as a POS company, like Toast, Inc.

“What we have on our side is our know-how in the hospitality business; plus we have an actual product out there which is proving that a nanobar can operate profitably. This is really important and it’s a big reason why VC investors are taking our meetings to find out more about us. We’re very happy about that, since getting a meeting is normally the hardest part.”

“Longer term we see nanobar as a global technology provider, with nanobars in thousands of locations.”

As nanobar is a hardware and software provider, not an operator, Raphaël says there are no issues with scalability. He is already in discussion with potential manufacturers for the machines themselves, while at the same time taking care of the marketing, legal and IP side. Sebastien, meanwhile, oversees the development of the web app, as well as handling accounting, business development and securing new test venues.

“Longer term we see nanobar as a global technology provider, with nanobars in thousands of locations. After North America our next step will very likely be Asia. Ultimately, nanobar is not in competition with the alcohol sector. People who want to drink alcohol will still do so. We offer a way to get on board with the sober trend and create a new revenue stream at little to no capital cost,” Raphaël concludes.

Get to know our Glion alumni

Our global alumni community now numbers almost 16,000 individuals spread to every corner of the world. Visit our dedicated alumni section to discover how our alumni ensure the Glion Spirit lasts forever.